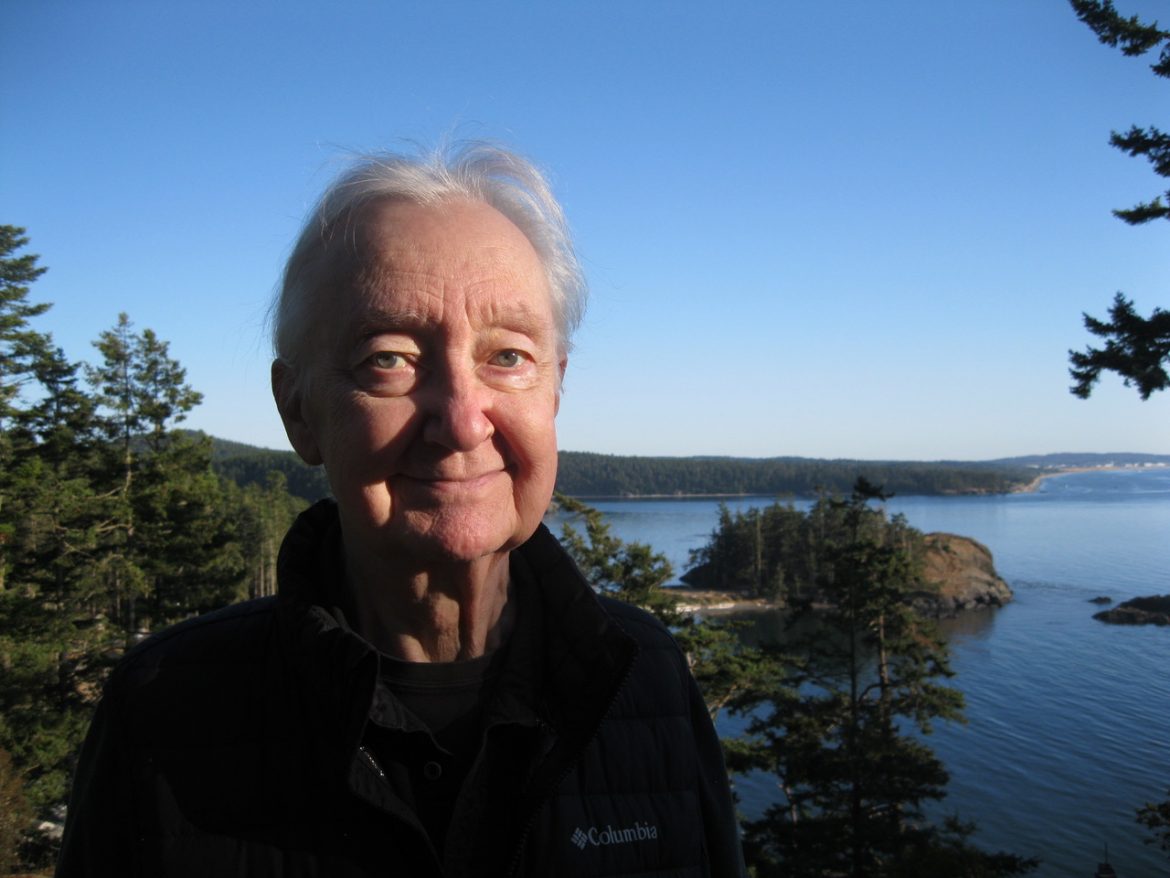 Roger Robinson gazes down at Rosario Beach from his home, the home his grandmother built years ago. His family roots in Skagit County date back more than 135 years, and he carries that legacy with him.

His great-grandfather was a minister in the Congregational church and worked as a missionary in India and Micronesia. In 1885 he was called to Fidalgo Island, where he and Roger’s great-grandmother settled in a small house that they built on Rosario Beach. Roger’s grandmother and mother were both born there, and his mother attended Rosario School, a one-room schoolhouse on Sharpe Road.

His great-grandfather founded three churches, one at Rosario, another at Dewey Beach, and years later, the Pilgrim Congregational Church at 28th and Commercial in Anacortes. That landmark was recently demolished to make way for a new mixed use building.

Roger was born in Seattle, the second of four children. His parents visited his grandmother often, and brought Roger with them for the first time when he was an infant. By then his grandmother had moved into Anacortes. As Roger grew older, he spent summers with her. “I rode my bike all over town,” he reminisces. “It was sparsely populated back then. Farms in the valley were more widespread, too, and I loved the colors and textures of the croplands. Less traffic, no malls. People had elbow room.”

He also took swimming lessons in Cranberry Lake. “A school bus picked up kids around the island and took us over there,” he says. By the time he was eleven years old he was teaching beginning swimmers himself.

Around then his father, a technical sales representative for General Electric, was transferred to Portland, Oregon. In 1964, when Roger was fourteen, his grandmother built a 900 square foot house uphill from the old family house. From then on Roger visited her there.

Roger majored in business at Portland State University, where he met Jan Heald. “She was fun, intelligent, and had beautiful curly hair,” he says. “I knew she was the one immediately.” They were married in 1978 in the Pilgrim Congregational Church on Commercial. Only months later they bought the 900 square foot house above Rosario Beach from his grandmother, who wanted to move to Portland. “We didn’t buy wedding rings,” he says. “Instead we made a down payment on that house. I’d loved it for years, and now Jan did, too.”

Though Jan and Roger lived in Portland, they spent weekends and holidays up here. In the 1980s they both became involved in local land use issues. “The first fiasco was a proposed waterski factory on South Fidalgo,” says Roger. “We and our neighbors thwarted that. Next we prevented a roller rink from being built nearby.” He’s continued to support the preservation of South Fidalgo for forty years.

In Portland, Jan and Roger raised two children, a son and a daughter. When their son was six years old, he announced that he wanted to live on a sheep farm, and they granted his wish. They moved to a ten-acre farm outside the small town of Scholls, about eighteen miles southeast of Portland, with views of Mt. St. Helens and Mt. Hood. “The fun part was trimming the hooves of the sheep,” jokes Roger.

Five months after moving to the farm, their daughter was born at home, just like women in her family generations before. Seven years later the Robinsons moved back to Portland.

In his early career, Roger worked as a “serial entrepreneur,” as he calls it. One of his first businesses was a small factory that produced handcrafted leather belts and bags that he sold to department stores and boutiques. “All my employees were hippies,” he quips. But for most of his career he imported fine tabletop glassware from Europe for mass merchant markets.

Once Roger retired and their children were grown, he and Jan moved here permanently, in 2012. From their perch above Rosario Beach, they see rolling green hills, wildlife, and the Olympic Mountains across the water.

Sitting on their comfortable couch beneath a Chinese painting of galloping horses, Roger muses about the future of Skagit County. “It breaks my heart when I think of FCCs (Fully Contained Communities),” he says. “Suburban sprawl would proliferate and bulldoze our county, eliminating farmlands. If we aren’t careful, the Skagit Valley will become the next Kent Valley — a developer’s dream.

“I realize we can’t keep the county like it is forever,” he continues, “but I hope it comes to its senses about reining in development. A three-person Board of Commissioners is just too small to be able to make these extremely important decisions. It’s just too big a responsibility. I wish the charter had passed in 2018 and that the Board of Commissioners had been enlarged to seven people. We need more diversity of opinion so issues can be openly debated. I’ve seen it work elsewhere.”

Roger’s message to the Board of Commissioners is simple: “Don’t allow FCCs.” He has witnessed a lot of change in Skagit County over the years, but now he thinks it’s about to spin out of control.

Editors’ note: Roger passed away on January 7, 2022, but not before he left this reflection on his lifetime commitment to protecting the beauty and unique character of Skagit.