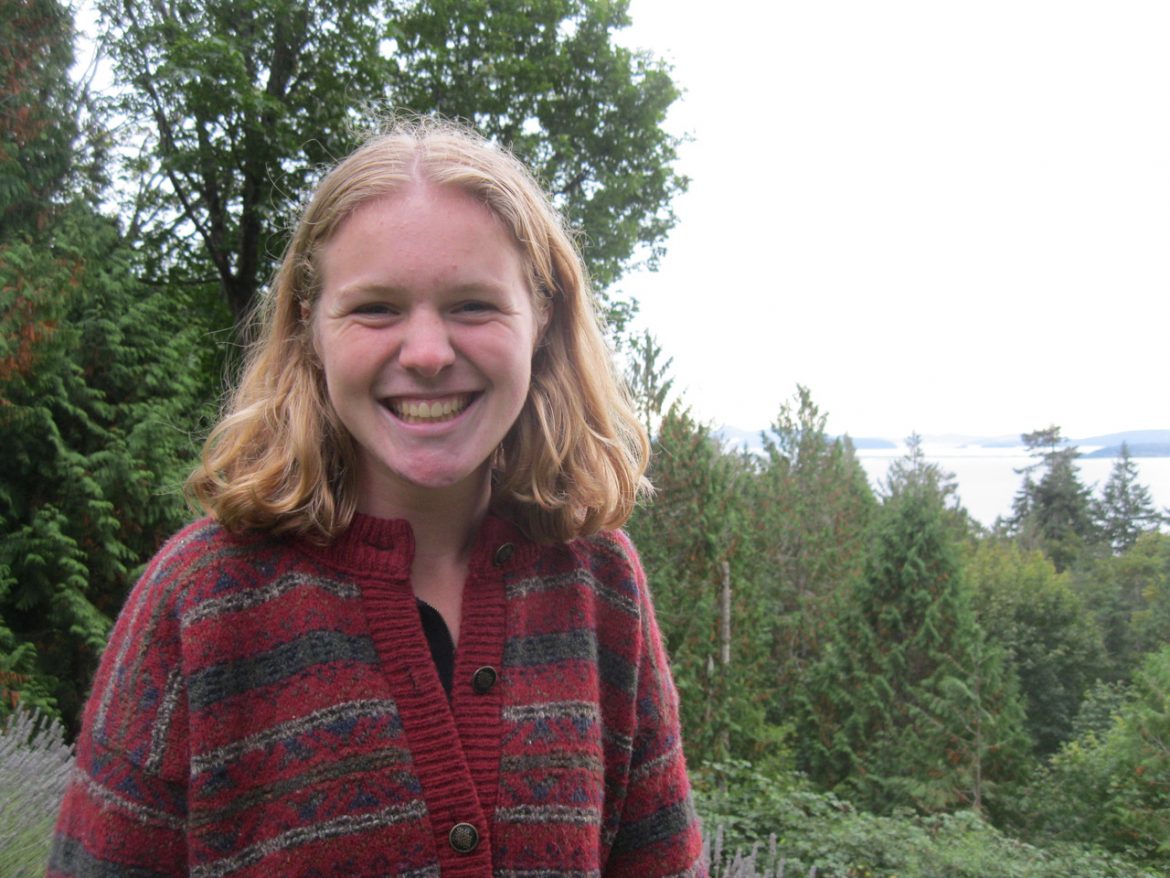 On weekends, Sage Mailhiot works at the Breadfarm in Edison. When she was very young, her mother began taking her to the artisan bakery, a local treasure.

“Some of my coworkers remember me in my car seat,” says Sage.

Sage’s parents moved to Skagit County from Seattle in 2000, before she was born. Her father is an arborist and her mother a garden designer, as evidenced by the lovely landscaping that surrounds the family home on a hillside above Bow. As children, Sage and her younger brother often went along with their mother as she drove around to see clients.

“We were crammed in the backseat with lots of plants,” she says.

Sage is a senior at Burlington-Edison High School. She excels in all her classes, but her favorite is A.P. English. In addition to writing papers, she writes essays, especially on social issues. Extra-curricular activities also consume much of Sage’s time. She founded a Social Justice Club, and for four years she’s been president of the Green Club, whose members recycle paper used and discarded by the school, and plant trees on school property, specifically oak trees.

“They’re a tree lover’s tree, according to my dad,” she says.

She also belongs to the Skagit County youth chapter of the Citizens’ Climate Lobby, an international organization dedicated to reducing greenhouse gas emissions and promoting innovative energy solutions. “Our chapter reaches out to local businesses about H.R. 2307,” says Sage. The bill, which would impose a carbon tax on fossil fuel producers, was introduced in Congress in April.

On the cross-country team, Sage runs in 5K races (3.1 miles), but on her own she runs about fifteen miles.

“When you run, small changes feel big,” she says. In the past five years several landowners along her road have clear-cut their property. “The energy is different now,” she says. “Parts of the road are wide open where before they were shrouded in trees that let dappled sunlight shine through.”

Recently Sage has taken up the sport of trail running on more mountainous terrain, careful not to trip over rocks and exposed tree roots. She’s relieved that Blanchard Mountain was saved from logging.

“That was scary,” she says. “I’ve been hiking up to the Oyster Dome since I was five years old. I can’t imagine the world without it.”

Living not far from the Whatcom County line, Sage can’t help comparing that county to ours.

“Skagit County isn’t like Bellingham,” she says. “Bellingham has less character and it’s more homogeneous. With a large Latinx community, we’re less white than they are. We’re more diverse and can learn from each other. For me, there are more kindred spirits in Bellingham, but there are no people with differing political views. Here my opinions are confronted, which is a healthy thing.”

College will offer more opportunities to have her opinions challenged. She’d like to take courses in geology, gender studies, environmental studies, and urban planning. The last two underpin the connection between the climate crisis and social justice, she says. She’ll begin applying to colleges soon, small liberal arts colleges like Colorado College, Amherst College in Massachusetts, and Pitzer College in California. “I want to see another place,” she says, “but this is my home. I’ll be sad to leave, and I’m already getting ready to be nostalgic.” She loves the county’s islands, bays, forests, farmlands, and local food.

The future belongs to young people, and it frightens many of them on a daily basis. But anxiety about global warming comes and goes for Sage. To cope she simply doesn’t let herself get too anxious, and it helps that she’s so busy. “I take comfort in routine and little actions,” she says. “I realize they’re not enough to solve the climate crisis, but they matter. They’re still worth doing.”

Many young people around the world feel betrayed by their local and national governments for not acting earlier to prevent global warming, but Sage believes its origins date back much further than a generation or two, and doesn’t pinpoint the blame. Still, she says, “Inaction greatens the problem.”

Development is at the core of the climate crisis, says Sage. “Global warming and capitalism are connected, and development is part of capitalism. It’s infuriating and ironic that less developed countries contribute less to global warming, yet suffer the most. Locally, I don’t think FCCs would benefit people in the county. FCCs would take away our natural spaces. Our towns and cities, even though they’re not totally beautiful, feel real. FCCs would feel unreal.

“The members of the Board of Commissioners have lived in Skagit County for a long time,” she continues. “With their connection to the county’s history, I can’t imagine how they’d allow FCCs, which would be the exact opposite of what this county is.”

Older people who hold power today, at all levels of government, should listen to young voices like hers.