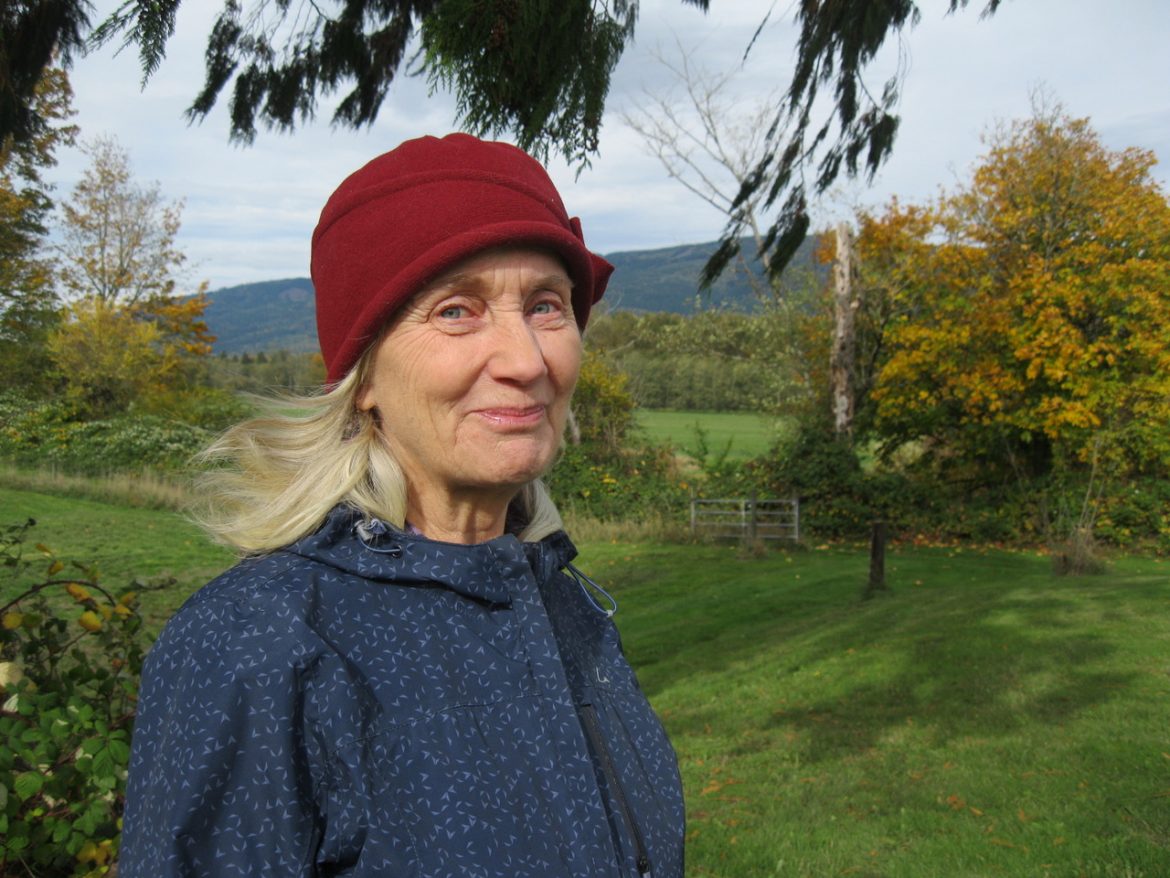 Until twenty years ago, Nan Monk was somewhat of a nomad, outside of Skagit County, then in it. She was born in New Britain, Connecticut, and moved around the east coast while growing up, ranging from several states in New England to as far south as West Virginia.

When Nan was in her twenties, she came out west with her first husband and their young child, to an 800-acre commune in Sonoma County, California. After a year they were lured northward, where they’d heard there was more open space. In 1980 they settled into a small cabin on Samish Island, close to the beach on Padilla Bay, and Nan worked at fish canneries in Anacortes.

Called the “Magic Skagit” back then, the county was very peaceful, says Nan, because there was much less development. “There weren’t any stoplights on Burlington Boulevard.”

Nan became an activist while living on Samish Island. “A nuclear power plant was going to be built there,” she says. “When word got out to the public, there was so much push-back that the plant was never built.”

After her divorce in 1988, Nan lived on Whidbey, Guemes, and Fidalgo Islands, where she practiced massage therapy. “Living on islands you’re surrounded by an abundance of water, which is healing. When I’m around water I experience tranquility.”

In 2002, Nan and her husband Michael Mahaffey, whom she married in 1995, moved from the Big Lake area to a 50-acre farm in Day Creek. “I never thought I’d live upriver,” she says, “but we wanted to live closer to the hills. With less encroachment of development, it’s wilder up here. I was finally able to put down roots.”

She and Michael do not farm their land themselves, but make it available to diverse groups of organic market gardeners, like the Latino organization Familias Unidas. They also converted a 100-year-old dairy barn into the Lodge at Cedar Springs, a retreat center and event venue. “At first it was a healing center, mostly for cancer patients, but now it’s becoming a community arts center. A group of quilters is in the lodge now.”

The purpose of their farm and lodge is to bring people and communities together. “We need more community buildings,” says Nan. “We need to connect people. That’s what will save us.

“We should build with peoples’ quality of life in mind,” she continues. “What I envision for the county’s future is that green spaces will be held in perpetuity. In fact, we need to create more of them. Green spaces have an effect on how we feel about ourselves, and on our sense of place.”

Because of the burgeoning population, she says,

“We can’t afford to build big anymore. It adds to our carbon footprint. Large homes could be converted into apartments, and new construction should be concentrated in our existing towns.”

Her primary concern for the future of the county is that planning for growth is not careful enough. “We have to accommodate the influx of people moving here by providing suitable housing for them, but we must maintain our county’s rural character. People will have to settle for less and share more.”

Over the years Nan’s activism has taken many forms, including protesting against the oil trains that pass through our county, to advocating for more bike trails. “I want future generations to experience the county as I have,” she says. “That’s why I’m an activist.”

Currently she volunteers for Family Promise of Skagit County, which temporarily houses homeless families in local churches and other group living situations until they get back on their feet. She also phone banks for the Skagit Rural Voices Project, sponsored by Indivisible Skagit. The project’s mission is to cross the partisan divide and listen to the concerns of rural voters.

Nan has heard her neighbors’ views on a variety of upriver issues. They say there is not enough high speed internet or public transportation, especially in outlying areas. There is too much logging. A local radio station, which many residents considered essential, no longer broadcasts live.

Also, they’re almost unanimously against Fully Contained Communities (FCCs). “They can’t imagine big subdivisions replacing farmland,” says Nan. Besides the visual affront, “They’re concerned about drainage, and being able to share the roads with the increased traffic FCCs would cause.” She says only one person she’s spoken with suggested a compromise of some sort.

Nan agrees that “plopping down” FCCs on what is now rural land is a bad idea. Furthermore, she says, “The model for FCCs is outdated, it’s a lifestyle of the past. Times are changing. FCCs aren’t feasible, practical, or smart, and most people know that. The county’s Board of Commissioners needs to listen to the public, in all its many voices. The public needs a say in where and how development takes place.”