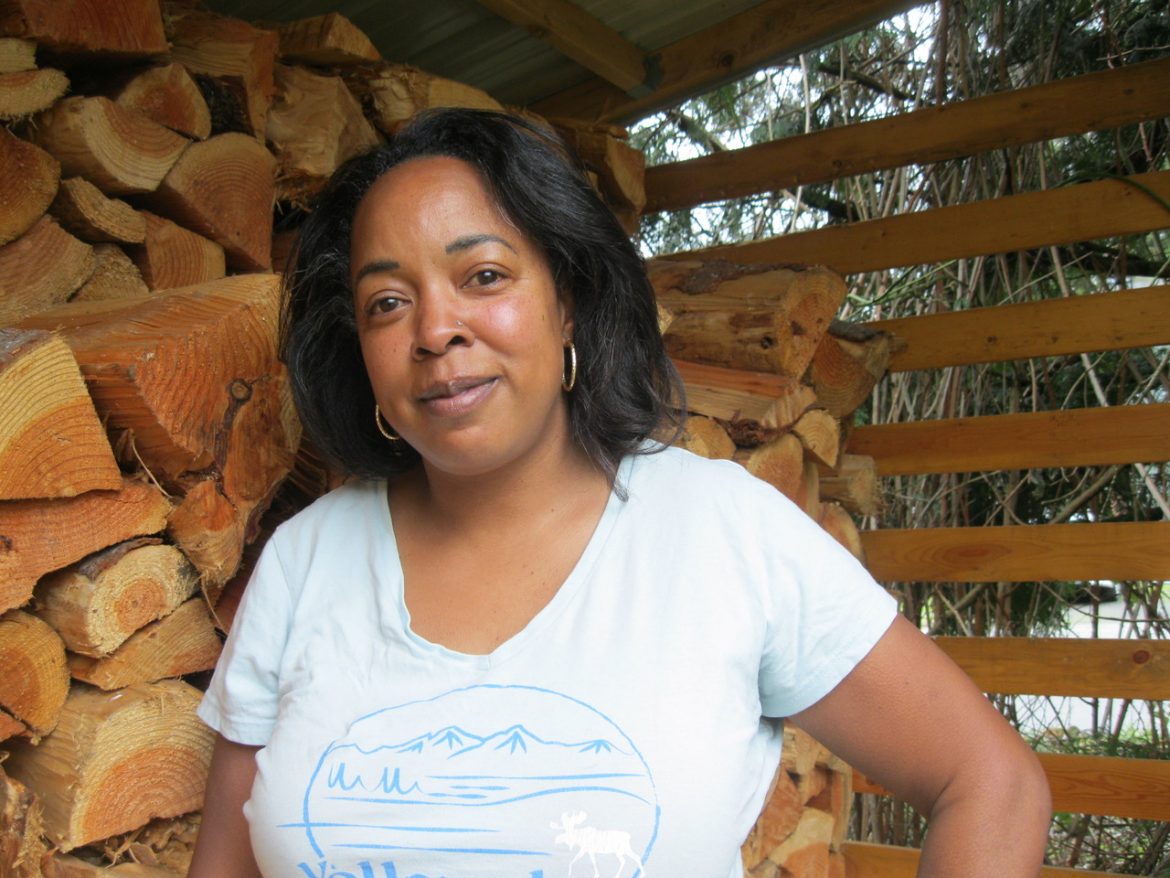 Germaine Kornegay poses in front of her wood pile at her home.

As a cozy fire burns in her wood stove, Germaine Kornegay settles into her couch and reminisces about her childhood. Her fondest memories are of going to North Carolina to visit her beloved great-grandmother, who owned and operated what was then the largest tobacco farm in the state. Germaine remembers huge, sweet-smelling tobacco leaves hanging in her great-grandmother’s barn to dry, or cure.

Germaine has loved farms ever since. She buys much of her food from farms near Sedro-Woolley, where she lives, and volunteers for the annual Skagit Valley Festival of Family Farms. She’s also a member of Skagitonians to Preserve Farmland, and worries that our county’s farmland would disappear if Fully Contained Communities (FCCs) are allowed to be built here. Skagit Valley and upriver farms not only feed us, they are known far beyond county lines as one of our area’s most unique and beautiful features.

Germaine was born an only child in Philadelphia, Pennsylvania. In her early twenties, she married a Navy man who served on the USS Kitty Hawk. From Philadelphia they were transferred to San Diego.

“We drove across the country with our two-month-old daughter Jasmine, a cat, and a boa constrictor,”

she says with a laugh. (Boa constrictors are surprisingly docile if unprovoked.) Jasmine, now thirty, lives in Mill Creek and is a mother herself.

After San Diego, the family was transferred to NAS Whidbey. Back then some Navy families were housed in Burlington, says Germaine. Her first impression of Skagit County was that it’s “an outdoorsy place,” she says. “The natural beauty upriver amazed me.” She got a job at a veterinary clinic in Mount Vernon, then worked with the owners of a pet grooming business in Burlington. She bought the business in 1995 and re-named it Animal House Pet Grooming.

In 2001 Germaine and her husband divorced, but she is still close with all her former in-laws. As a single mom, she and Jasmine moved to Sedro-Woolley, into the house where she still lives, “Because I could afford it,” she says. Her household companions are four chickens and a rescue dog, a rambunctious Rottweiler named Trey, so-named because he is the third Rottweiler she has owned. Trey competes in agility trials held by the American Kennel Club.

While still running her business, which is now located in Sedro-Woolley, Germaine attended Western Washington University in Bellingham, graduating in 2012 with a major in human services and a minor in psychology. She has advocated for women victimized by domestic violence and sexual assault, and volunteered at a shelter for homeless teenagers, many of whom were LGBTQ teens rejected by their parents.

In 2013 Germaine ran for Sedro-Woolley’s City Council. By then, through volunteer work, her business, and membership in the Chamber of Commerce, she had gotten to know her community well and wanted to affect its future.

During her campaign she had one doorbelling experience that deeply affected her.

“The man who answered the door said, ‘I’ll never vote for you because you’re Black,’” she vividly recalls. She listened to him continue his rant, during which he confessed that he hated that he was a bigot. Germaine tears up as she says, “I felt sorry for him. He hated himself as much as he hated me.”

This interaction had the opposite effect than one might expect.

“What he did was motivate me,” says Germaine. “I thought, ‘I’m going to win and represent this man,’”

and win she did.

Germaine was re-elected in 2017, but in August 2020 she resigned in order to accept an appointment as a commissioner of the Skagit Public Utility District, which operates the county’s most extensive water pipeline system. Germaine is the first woman and person of color to serve on the PUD.

Back when she moved to Skagit County, it had a small-town feel, says Germaine, but it evolved. Burlington has grown faster than Sedro-Woolley. Even with its new library and other improvements, “Sedro-Woolley is still down-to-earth,” she says.

Germaine’s main concern about the county’s future is the impact population growth is having on both education and farmland.

“Skagit County is growing faster than schools can afford,” she says, “and farmland is dwindling.”

“I’m cynical about FCCs,” says Germaine, “because with FCCs elsewhere the outcomes have not been good. They say FCCs are affordable housing, but they’re not. Two FCCs south of here, Redmond Ridge and Issaquah Highlands, house Microsoft employees. First-time homebuyers could not afford to live in an FCC. So, who would the market be here?”

“An FCC is not ‘fully contained,’” she continues, “because it has no infrastructure of its own. It would have to siphon its infrastructure off surrounding communities. Opposition to FCCs is something we all agree on — liberals, conservatives, and everyone in between. The Board of County Commissioners needs to listen to the people they represent.”