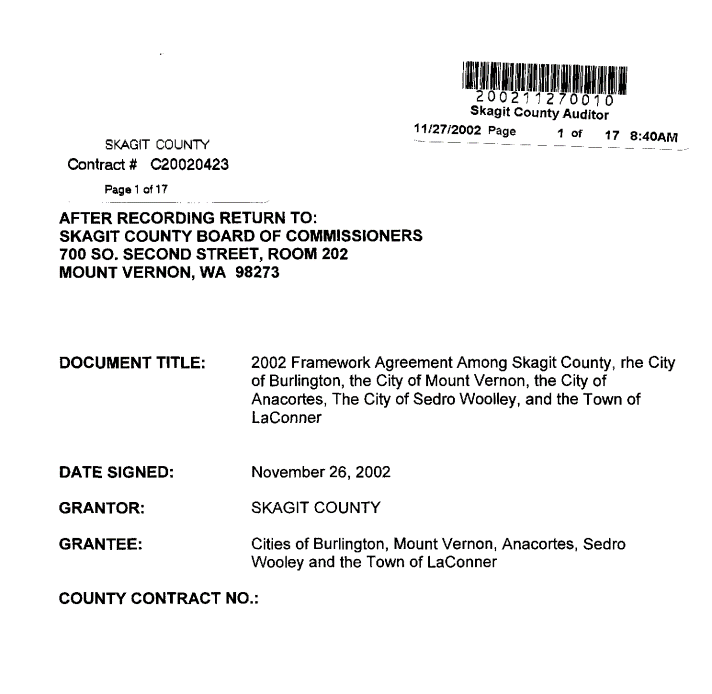 The Framework Agreement was adopted in 2002 by Skagit County and the cities of Anacortes, Burlington, Mount Vernon, and Sedro-Woolley, and the Town of La Conner, to update the process for adopting and amending countywide planning policies.1

Countywide planning policies (CPPs) are written policy statements, required by the Growth Management Act, which establish a common framework for developing county and city comprehensive plans and ensuring those plans are consistent with one another.

The 2002 Framework Agreement arose out of a series of land use disputes between the county and the cities focused on county-approved development in the cities’ urban growth areas. It replaced an earlier agreement that had guided the initial adoption and subsequent amendment of the CPPs.

The Framework Agreement reads in part:

It is the intent of Skagit County and the Cities to cooperate in efforts to provide visionary leadership on regional plans, policies and issues…It is the purpose of this Agreement to enhance the ability of the parties to…plan for the future development of the Cities and the County to the end that the governments achieve a county wide pattern of community building, land use and conservation that reflects the environmental, economic, aesthetic, and social values of city and county residents.

To carry out its work, the Framework Agreement establishes a body called the GMA Steering Committee. The committee consists of the three county commissioners and the mayors of each of the cities and towns that are party to the agreement. The GMA Steering Committee functions in a manner similar to the Skagit Council of Governments Board, except that its membership is limited to the county, cities and towns that plan under the Growth Management Act and its focus is their shared planning responsibilities under the GMA.

The Steering Committee’s key role is to consider policy actions regarding the physical growth and development of the county. Its policy decisions are reflected in the form of amendments to the CPPs. In recent years, the primary CPP the Steering Committee has focused on is CPP 1, which addresses urban growth.

For instance, as the county and the cities worked to update their comprehensive plans in 2016, the Steering Committee considered the following policy questions:

The decisions it made are reflected in the updates to the CPPs adopted by the county and the cities in 2016.

Under the Framework Agreement, policy decisions including the content of CPPs should generally be arrived at by consensus. In the event unanimous consent cannot be achieved, decisions shall be made by a simple majority of the number of votes present at a particular committee meeting.

The agreement does contain a dispute resolution process that a jurisdiction can invoke if it strongly disagrees with a decision on a CPP. If the dispute resolution process fails to resolve the issue, then the GMA Steering Committee will take a final, binding vote, guided by a complex decision rule: For a proposed CPP amendment to pass under those conditions, it must be supported by a supermajority of the population-weighted votes present. (For further clarification, see the Framework Agreement text itself).

This procedure effectively gives the largest city in the county – Mount Vernon – or a coalition of smaller cities representing the supermajority threshold – the ability to block CPP changes that, for instance, the county may be interested in making.

The GMA Committee shall not substitute for or replace the duties and responsibilities of the legislative bodies of the member jurisdictions.

By extension, the Board may also not unilaterally adopt CPPs or CPP amendments that were not developed in consultation with and approved by the GMA Steering Committee.