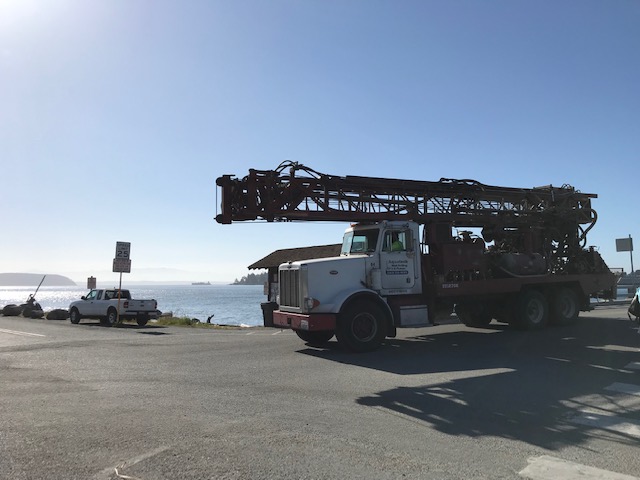 Department of Ecology weighed in early on.

Stephen Orsini recalled in a previous Scoop article that when Guemes wells began to fail back in the early 90’s, the State Department of Ecology issued a letter to Skagit County Health Department recommending the cessation of further well drilling on Guemes Island until a plan could be worked out to protect the quality of water in its fresh water aquifers. No action was taken by the County at that time.

Since 2016, the citizens’ group Guemes Island Planning Advisory Committee (GIPAC) began making proposals to amend the County’s Comprehensive Plan. GIPAC made multiple proposals to Skagit County to remedy the problem with virtually no success. They did succeed in 2020 in getting approval from County Commissioners to allow rainwater catchment systems on Guemes as an alternative water source. However, that plan has not been implemented because the County has not acted to secure an engineer-approved template homeowners can use to get permits for such water systems. As a result, that victory remains in limbo. Certainly high staff turnover in the Planning Department has been a factor in the delays.

Islanders Persist to No Avail

None of GIPAC’s proposals to monitor seawater intrusion, and regulate the impact of new wells have been supported by County Planning staff, nor approved by County Commissioners.

In 2020, the group submitted a petition to require a hydrogeologic review before drilling a new well to determine the impact on nearby wells. In public testimony given on May 24, 2022, Hal Rooks, current Chair of GIPAC, reminded Commissioners that since Guemes Island is a critical area and a sole source aquifer and is a Class A recharge system, this requirement is already in County code. It has never been enforced. (Rooks’ statement video at 1:47:50.) The 2020 petition was rejected based on a still-secret memo from one County attorney who apparently claimed the County doesn’t have authority to regulate well drilling. GIPAC attempted to see the attorney’s reasoning via public records request. The documents they received were completely redacted, essentially a piece of paper totally blacked out.

In 2022, Guemes Islanders tried again. They submitted a petition to amend the Skagit Comprehensive Plan to implement a seawater intrusion monitoring system on Guemes Island. Skagit County Planning staff once again recommended denial. The reason given this time was that the safety of well water is the responsibility of the Health Department.

As Rooks recounts, it’s not that viable solutions don’t exist. The Washington Department of Ecology urged GIPAC to talk with Island County which has similar challenges protecting sole source aquifers within their boundaries. Island County does have a seawater intrusion monitoring system and hydrogeological review on new wells in critical areas. San Juan County has also taken a more proactive approach to similar water challenges.

The conundrum over which County department is responsible for addressing the water safety issues and the regulation of new well drilling remains perplexing. Mr. Rooks described it this way in on May 24, 2022,

“When I first came into this committee in 2016, water and well water issues were under Health. Around 2016 it was taken away from Health and given to Planning where it’s been for the last years since 2016. Now about a year ago or so we were told no, it’s going to go back to Health. It’s no longer going to be in Planning.”

Rooks goes on to vividly recount the Islanders’ ping pong ball experience trying to get answers from Health Department and Planning Department personnel about which agency is responsible for what. It would be almost comic except that the safety of people’s water supply is at stake.

“We love beating our head against the wall with you all.”

Rook’s frustration, although graciously expressed, seems more than justified when his testimony ends with these words,

“The critique of this [2022] code amendment we put in is that it’s on the Planning Department form. Well, the Health Department doesn’t have a form to do code amendments. Then we’re told Health doesn’t want to do code amendments. So as a citizen, I’m looking at a county that has part of the planning code that says you’re supposed to be checking wells in sensitive areas like Guemes Island. It’s not being done. So, has a magic wand been waved over this whole issue because it’s now been switched to Health and Health doesn’t engage in these kinds of things? Or is it still Planning? It’s a very confused situation. All we know is that the water situation is not going to get better on Guemes and punting the problem down the road isn’t helping.”

Commissioner Lisa Janicki responded at the hearing with shared exasperation,

“If getting a solution for Guemes Island is the only thing I do before I get out of this office, this is going to have be it. And I share your frustration.”

Nevertheless, on June 14 (video at 48:35-2:24:10), when County Commissioners voted on which citizens’ proposals to approve for the 2022 docket, the Guemes Islanders’ proposal was not included. The vote was unanimous.

”So far, I feel like we just haven’t been able to do anything of substance. There’s going to be saltwater in all those wells if we don’t up our game here.”

“Regardless of who is responsible, something needs to be done quickly.”

Browning asked Planning director Hal Hart to “research how this issue can be resolved.”

It has been nearly three decades since wells began to fail on Guemes Island due to over drilling. Both the Health Department and the Planning Department have failed to protect the water quality and the sole source aquifer that Islanders depend on. Strong words aside, unless there is direct, sustained, executive leadership from County Commissioners, how likely is it that the people of Guemes will see a different result?