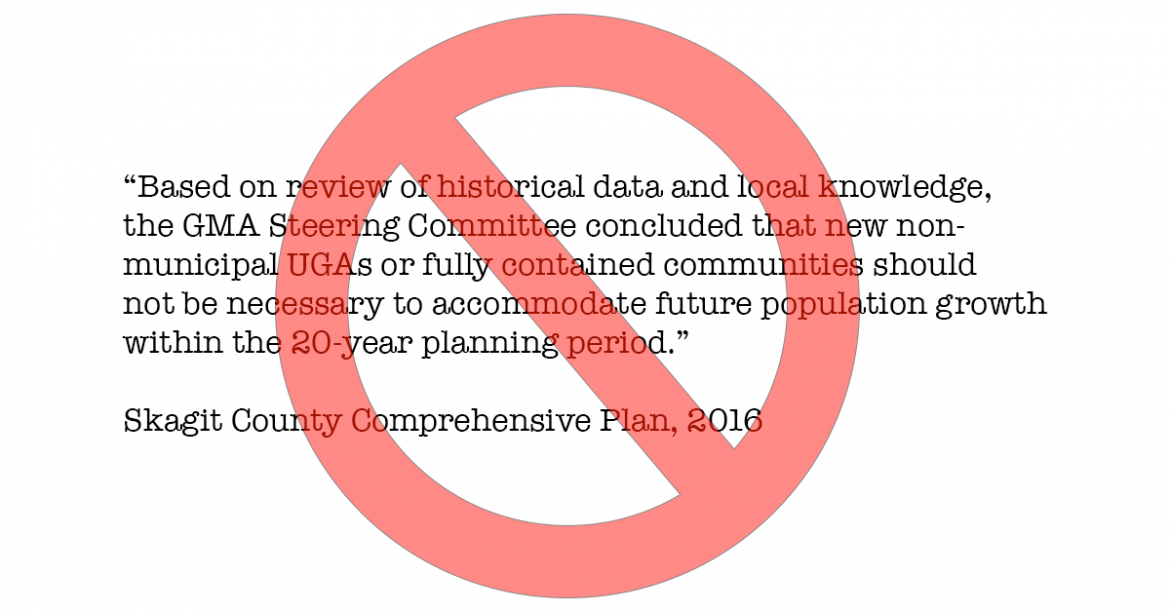 The decision by the Skagit County Commissioners to docket (or give further consideration to) the Skagit Partners’ proposal to allow fully contained communities has raised a number of questions about the process for making such a consequential growth decision.

In Skagit County, decisions regarding urban growth are required to be made by the county in consultation with the cities and towns (which, for simplicity’s sake, will be referred to here as “the cities.”)

But a private developer, Skagit Partners, submitted amendments to the countywide planning policies (CPPs) and the county’s comprehensive plan and development regulations to allow the creation of FCCs in Skagit County. Skagit Partners has a long-standing interest in developing an FCC at Butler Hill, north of Burlington and east of I-5.1

Because FCCs are a type of urban growth – featuring many of the characteristics of a city but lacking a municipal government to provide urban services – this is a decision the commissioners cannot make by themselves. In fact, it would run counter to policies the county and cities adopted as part of comprehensive plan updates completed in 2016.

The county commissioners appear to understand they can’t by themselves amend the CPPs. Their docketing resolution only authorizes further consideration of Skagit Partners’ proposed comprehensive plan policies, not the amendments to the CPPs or the county’s development regulations. 2

However, even the proposed comprehensive plan amendments submitted by Skagit Partners, if adopted as written, would violate the existing CPPs, making the county’s comprehensive plan vulnerable to legal challenge. And the county’s unilateral decision to conduct an Environmental Impact Study (EIS) on FCCs, without the support of the cities, violates the intent of a key regional planning document called the Framework Agreement.

The GMA Steering Committee also plays a fundamental role in deciding whether FCCs are allowed in Skagit County. The current CPPs do not authorize FCCs. CPP 1.1 states:

“Urban growth shall be allowed only within cities and towns, their designated Urban Growth Areas (“UGAs”) and within any non-municipal urban growth areas already characterized by urban growth….”

The only non-municipal urban growth areas identified in the CPPs are the Bayview Ridge UGA and the Swinomish UGA. The CPPs provide each existing UGA with a 20-year population and employment allocation. There is no “reserve” urban population or employment allocation for FCCs or any other type of urban growth area not specifically mentioned in CPP 1.1.

The GMA Steering Committee discussed FCCs as part of county and city comprehensive plan updates in 2016. These coordinated, 20-year plan updates were required by the Growth Management Act.

A representative from Skagit Partners made a presentation to the GMA Steering Committee in support of FCCs. Two of the three county commissioners also spoke in favor of FCCs, as did the mayor of Burlington.

Several mayors, however, strongly opposed FCCs, particularly the mayor of Mount Vernon and the then-mayor of Sedro-Woolley. They argued that cities are best equipped to provide the services needed for urban growth and that planning done by each city demonstrated the county as a whole had adequate land to accommodate projected urban residential growth for the next 20 years.

As documented in the Skagit County Comprehensive Plan, the GMA Steering Committee chose not to support FCCs as part of the 2016 update process:

The adopted population allocations do not include population numbers for future fully contained communities or non-municipal UGAs such as Bayview Ridge (other than a minor population allocation to Bayview Ridge reflecting existing buildable residential lots). Based on review of historical data and local knowledge, the GMA Steering Committee concluded that new nonmunicipal UGAs or fully contained communities should not be necessary to accommodate future population growth within the 20-year planning period. The selection of the medium population forecast also recognizes the unique quality of life and rural character of Skagit County and that planning efforts for further growth should reflect the desire to protect and preserve that character while promoting a robust economy that compliments the policy to preserve and protect Skagit County’s rich agricultural and resource heritage.5

The Steering Committee forwarded its initial recommendations to the cities for consideration by their councils as part of their own comprehensive plan updates. The Steering Committee’s recommendations also included the proposed population and employment allocations for each of the cities. Once adopted by the county and the various cities, these targets established the agreed-upon framework under which all jurisdictions completed their GMA planning.

Following the 2016 update, the GMA Steering Committee again rejected a request by Skagit Partners to consider FCCs in 2017. And in 2018, the Steering Committee denied a proposal to analyze some of the urban growth issues raised by the FCC proponents, saying the recent 2016 update had sufficiently addressed those issues.

The bottom line is that the county cannot move forward unilaterally on FCCs. The county cannot by itself amend the CPPs and urban population allocations or designate new UGAs – including FCCs. Nor can the county amend its comprehensive plan and development regulations in a manner inconsistent with the existing, regionally adopted county wide planning policies that don’t allow FCCs and don’t provide an urban population allocation for them.

The Commissioners’ interest in FCCs appears to be motivated at least in part by concern over rapid population growth in Skagit County; the shortage of housing needed to meet that growth; escalating housing prices; and the specific shortage of housing affordable to moderate- and low-income households.

That concern is shared equally by many city officials and members of the public who nonetheless strongly believe that FCCs are not the answer.6 Instead, the better approach is to continue working within the growth framework the county and the cities cooperatively agreed to in 2016 and that the GMA Steering Committee has reaffirmed several times since then. That framework indicates that the majority of Skagit County’s new residential growth should occur in existing cities where infrastructure and urban services already exist.

Through the 2016 updates, each of the cities demonstrated they had adequate land in their urban growth areas to accommodate their – and collectively, the county’s – 20-year residential growth allocations. This fact alone would make designation of several hundred acres of new urban residential land through an FCC legally insupportable.

The cities also strengthened their comprehensive plan housing elements through the 2016 updates. Since then, they have adopted new development regulations and zoning maps to allow a wider variety of housing types7; to increase residential densities in various zoning districts; to allow or intensify the use of accessory dwelling units; and to encourage residential infill and redevelopment in downtowns and commercial districts. Cities have also forged new partnerships with non-profit housing agencies to increase the supply of below-market-rate affordable housing.

Although COVID-related shortages of workers and building supplies have affected housing construction over the past couple of years, the results of these strengthened housing policies and initiatives are starting to come to fruition. Examples include several new apartment, condominium, and affordable housing projects under construction or recently completed in Sedro-Woolley, Burlington, and Anacortes. In Mount Vernon, construction has just started on a 70-unit supported housing project for homeless people that is a partnership between Skagit County, Catholic Housing Services and the City of Mount Vernon.8 The city anticipates several other multi-family, affordable housing projects to begin construction in the spring of 2022.

There is still much work to do. Those who oppose FCCs – and are concerned about the high cost and limited supply of housing in the county – should actively support and highlight positive housing trends occurring in our cities. We should encourage our elected city officials to be bold and creative in embracing proven forms of urban infill, redevelopment, and intensification that are affordable, visually appealing, and that enhance overall community life.9

Skagit County will continue to grow. The county and the cities should continue to pursue growth strategies to ensure that county residents have adequate and affordable housing options and that Skagit County retains its farm, forest and rural lands, and its distinct look and feel as compared to places like the Kent Valley, Lynnwood and Marysville.